How to recognize greenbriers. Greenbriers are woody vines that bear leathery, alternately arranged leaves, simple in complexity, with entire margins. They are our only native woody members of a large taxonomic group–the monocots–that otherwise consists of herbs such as grasses, lilies, and cat-tails. Like other monocots, the venation is parallel, although this is a bit difficult to discern because the leaves are so wide. Below, see roundleaf greenbrier. 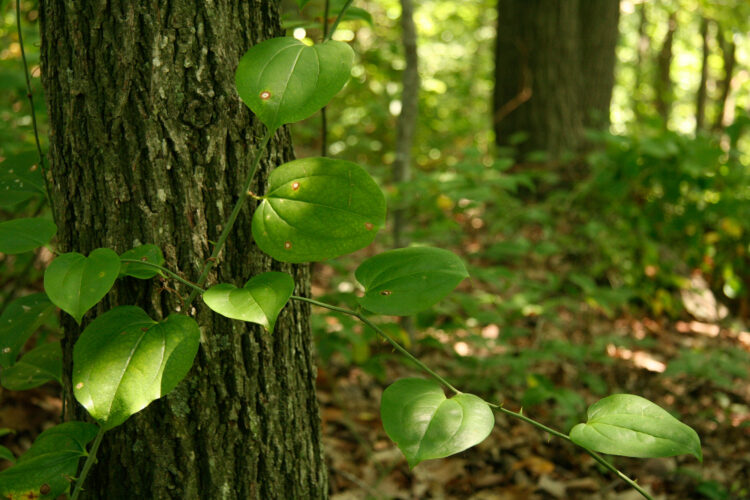 Roundleaf greenbrier is a woody vine with broad parallel-veined leaves. 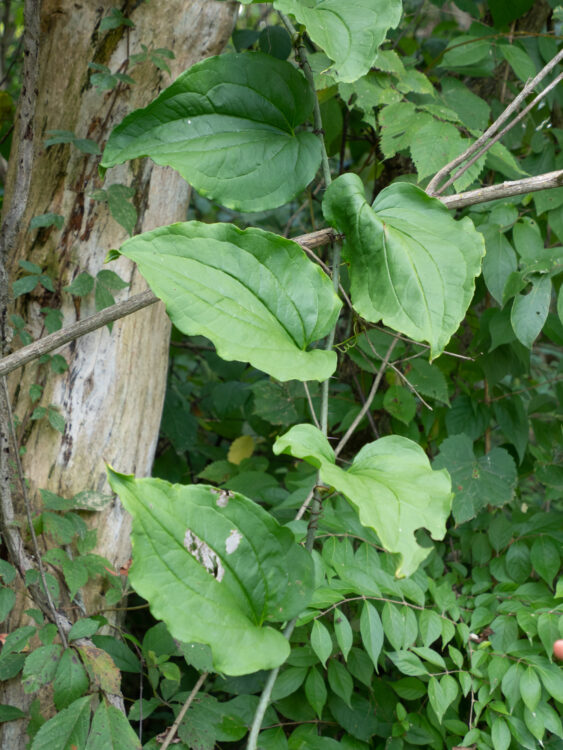 Bristly greenbrier is a woody vine with broad parallel-veined leaves.

Greenbriers are prickly; those of roundleaf greenbrier are especially stout… 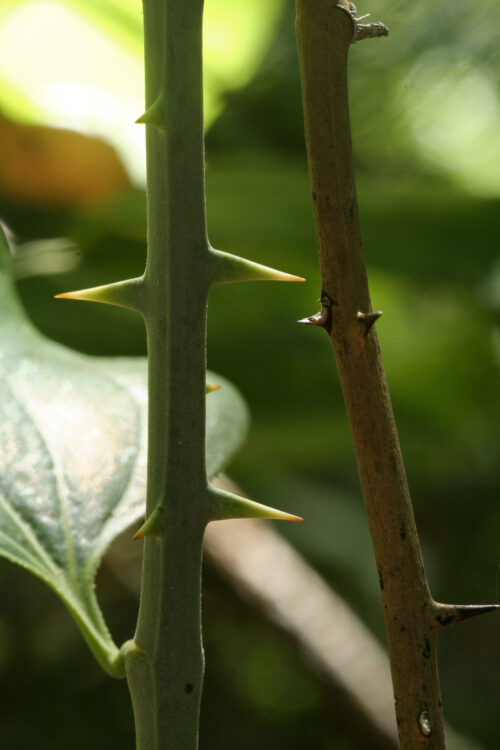 …while the prickles of bristly greenbrier are narrow-based, and often crowded on the stems. 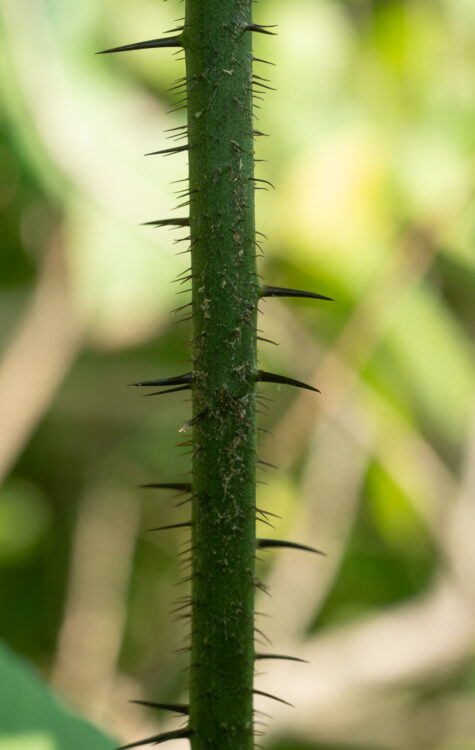 Lianas (woody vines) attach themselves to trees and such in a variety of ways. Some lack special attachment structures and simply twine around stems (examples: bittersweet and moonseed). Others, including grapes, Virginia creeper and our present object of attention–greenbriers–use tendrils. 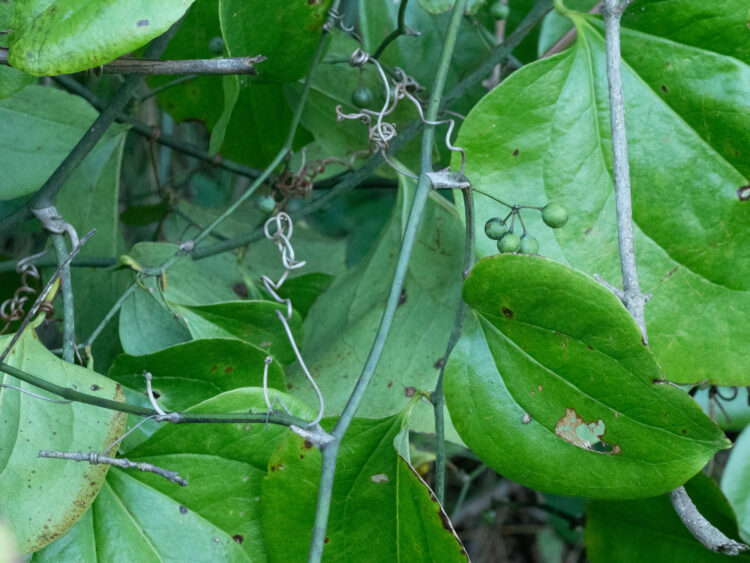 Flowers and fruits. Reflective of their close affinities with lilies and other monocots, members of the genus Smilax have fairly showy flowers that based on threes: 3 sepals and 3 petals that look so alike they are sometimes called “tepals.” The inflorescence type is an umbel: stalked flowers all attached at the same point. 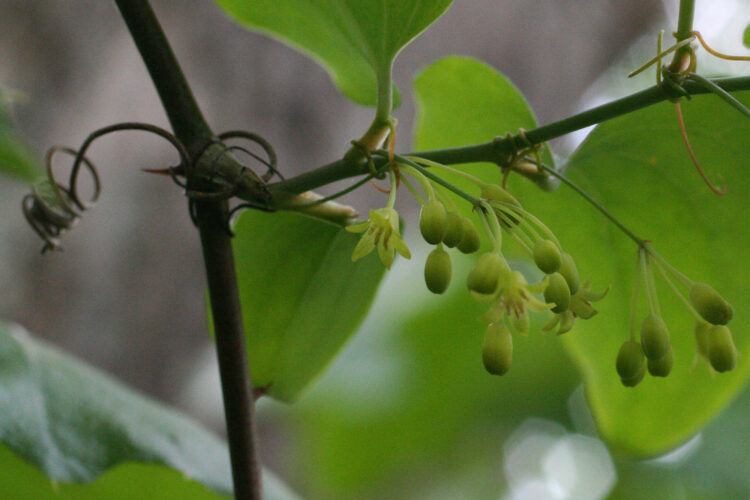 The fruits of greenbriers are drupes. They are black when ripe, which they aren’t quite in the photo below. 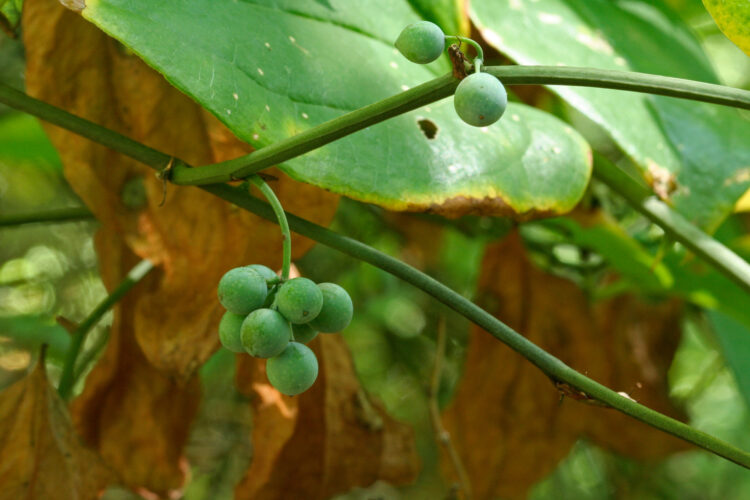 In the winter. Roundleaf greenbrier has green photosynthetic stems with stout prickles and it is attached to branches using twining tendrils. (For bristly greenbrier, the prickles are narrow and more numerous.) 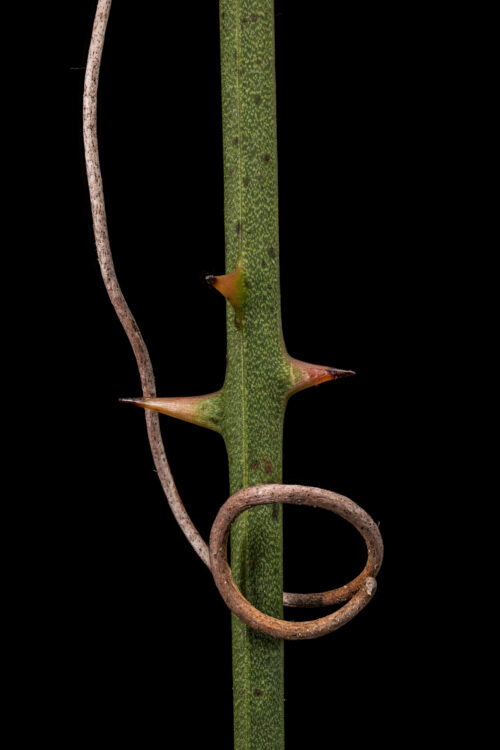 Greenbrier has prickles and tendrils. apparent all year long.

Where to find roundleaf greenbrier.   E. Lucy Braun, in The Woody Plants of Ohio (1961, 1989; The Ohio State University Press) tells us that roundleaf greenbrier is “One of the most viciously spiny of our plants; the thick rigid but sharp-pointed prickles readily penetrate the skin. A common and wide-ranging species, but not extending as far westward as [Smilax glauca and S. hispida]. In Ohio, common in the acid soils of the Allegheny Plateau, more local westward; often forming dense tangles particularly in thinned woodlands and where the dying of chestnut opened up the forest canopy.” 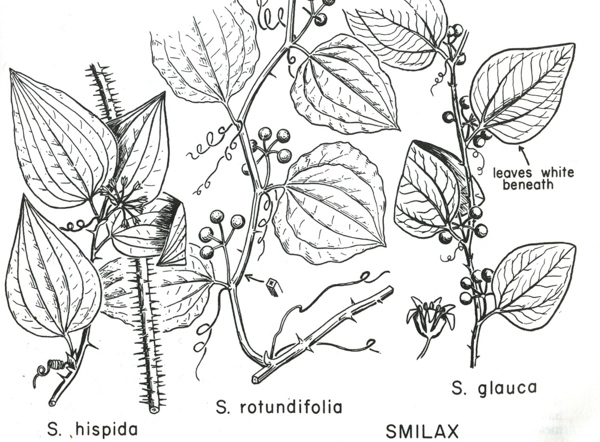 Roundleaf greenbrier is in the center.

Thinking in terms of plant anatomy and taxonomy, how are greenbriers unique? What is another example (not quite native to Ohio, but sometimes planted and escaped)?

Greenbriers are our only native monocots that are woody. Another such plant, but not native, is bamboo (a grass).