How to recognize tuliptree.  The leaves are alternately arranged, simple in complexity, lobed, and look like a giant tortoise bit their tips off! Also, at least when young, the leaves have prominent stipules (leaflike appendages at the base of the leafstalks). 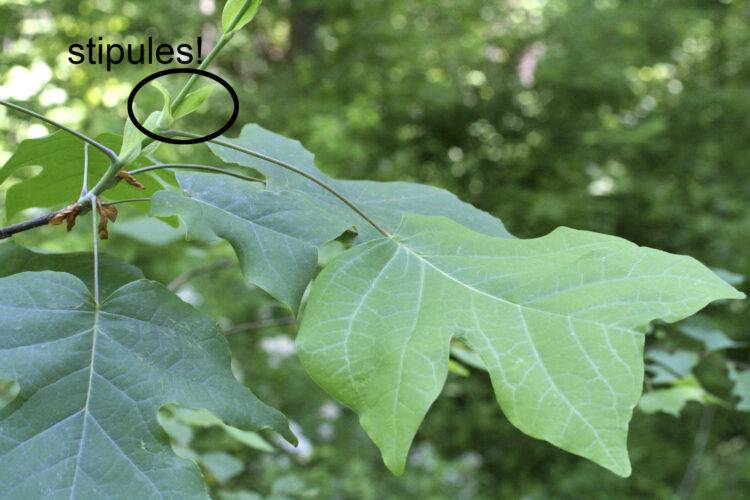 And oh, look at those flowers! 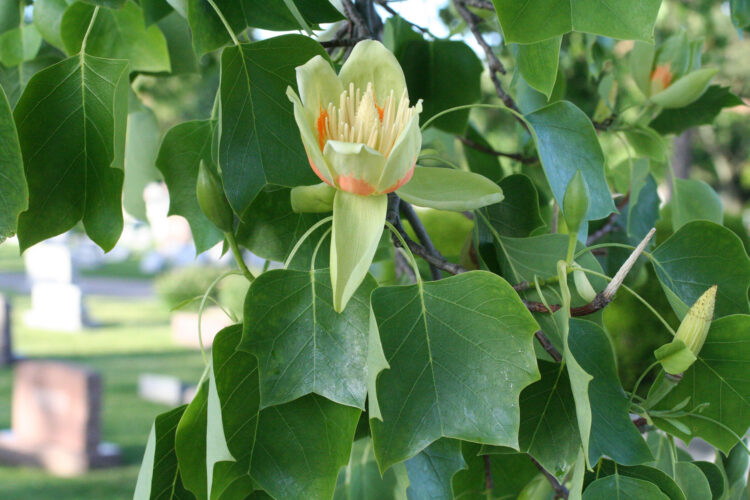 This is pretty so we’ll just stick in here what the heck. It’s a tiger swallowtail caterpillar looking like a snake. I am so scared! 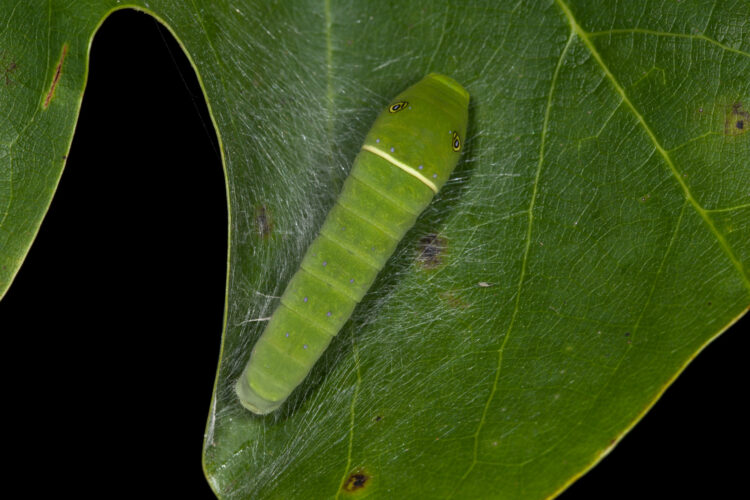 Flowers and fruits. Although not a close relative of tulips (which are monocot herbs in the lily family), the flowers, being large with  some parts in threes, are indeed somewhat tulip-like. They have 3 petal-like sepals and 6 petals, all pale yellow (but with an orange blotch at the base of each petal). There are a great many stamens, spirally inserted and, in the center of each flower, many seed-bearing carpels also spirally inserted. These are traits of the primitive flowers that characterize the Magnolia order and family. 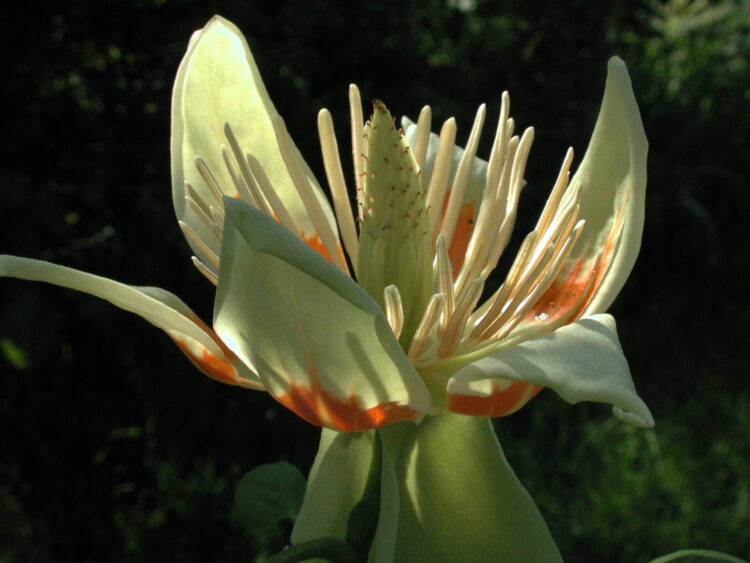 A tuliptree flower has many stamens and carpels, spirally arranged.

The fruits of tuliptree are one-seeded affairs, each with a wing to enable wind-dispersal far and wide. They are evident well into winter (the photo below was taken in a recent mid-January). 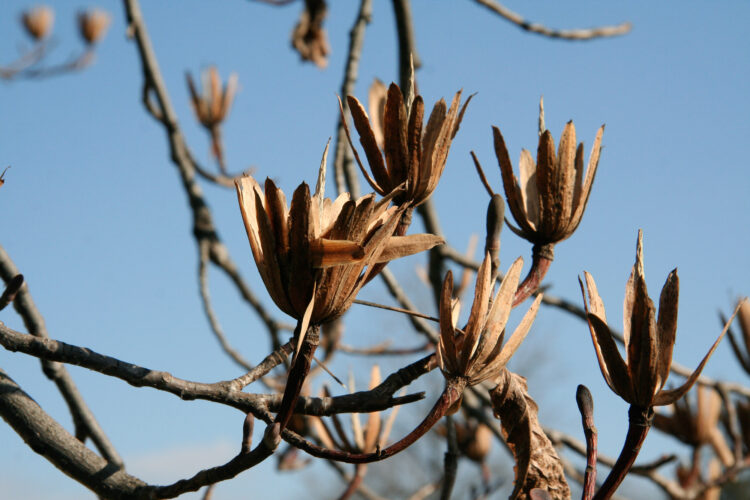 Tuliptree in fruit. They are samaras–one-seeded wind-dispersed fruits.

Here are some Liriodendron samaras on the ground along with the perhaps more familiar maple ones. 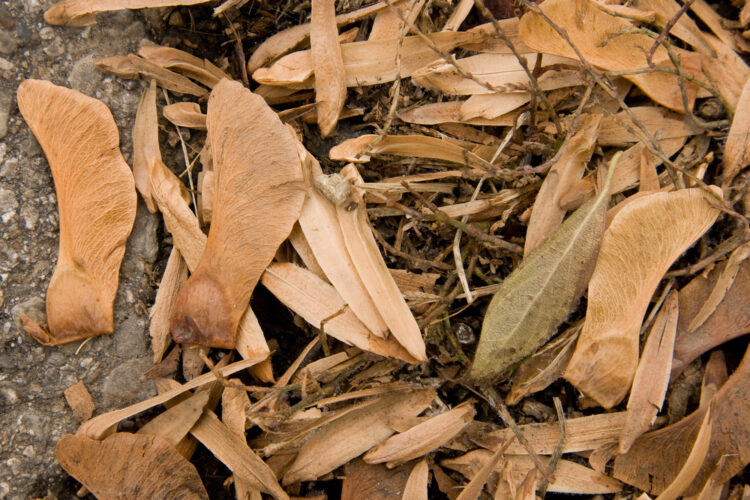 Samaras of tuliptree (the narrow ones in the center)
with those of Norway maple (the broader ones).

Bark. A tuliptree trunk is pole-like, uniform in diameter and free of branches for a great portion of its length, with fine ridges running lengthwise. 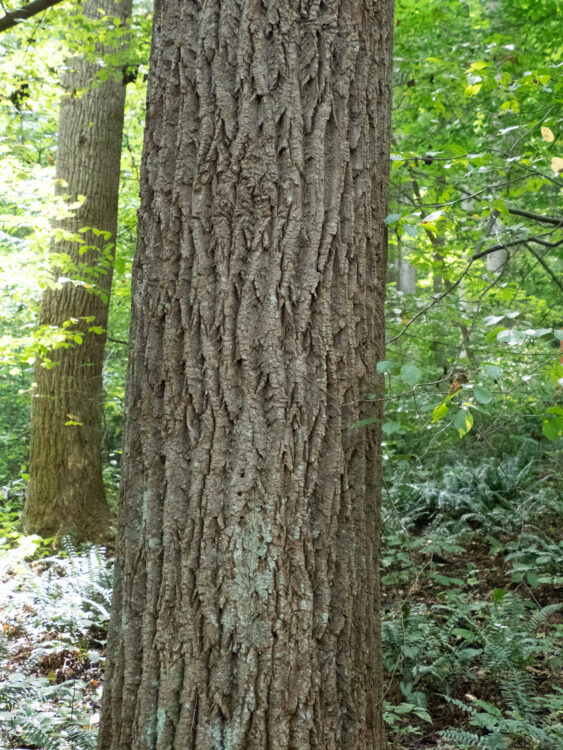 A tuliptree trunk is straight and true.

In the winter. Tuliptree twigs have a prominent terminal bud that is elongate with bud scales meeting at the edges, making it look rather like a duck’s bill. The leaf stipules have left prominent stipule scars encircling the twig just above each leaf scar. The leaf scars are round, with about a dozen bundle scars scattered within. 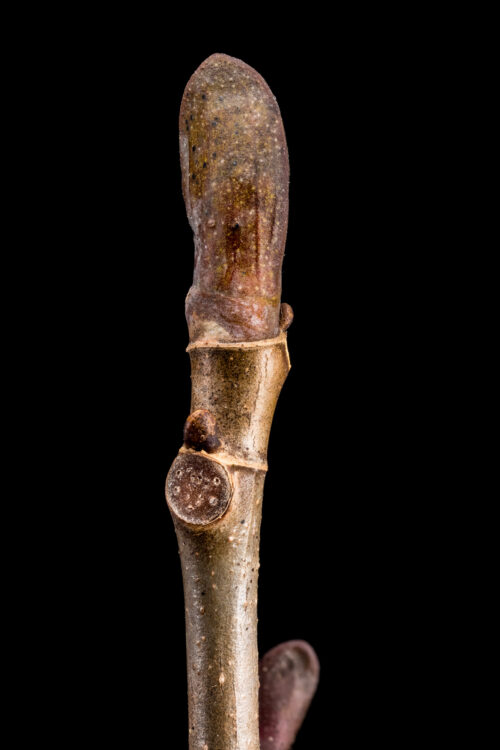 Where to find American tuliptree. E. Lucy Braun, in The Woody Plants of Ohio (1961, 1989; The Ohio State University Press) tells us that tuliptree is “The tallest eastern American hardwood species, sometimes attaining a height of 300 ft. and a trunk diameter of 8-10 ft.; largest Ohio tree (in Vinton County) is 4.5 ft. D.B.H. (Ohio Forestry Assn.). IN eastern Erie Co., “many of the largest trees in the primeval forest were of this species” (E.L. Mosely, 1894, herb.slip.). Widely distributed in the Deciduous Forest east of a line extending from Lake Michigan southward to the Ohio River and thence along the Mississippi River; limited westward bt drier climate. A dominant in some communities of the mixed mesophytic Forest Region and of the Oak-Chestnut Region. Widespread in Ohio, but less frequent in the west-central and north-western parts of the state–the climatically drier parts.

Scanned Drawing from an Old Book
(Flora of West Virginia, by P.D. Strausbaugh and E.L. Core 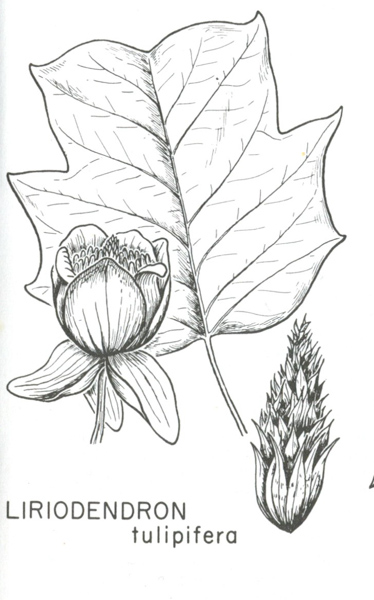 To what family does tuliptree belong, and what aspect of its flowers reflect an ancient lineage?

A member of the Magnolia family (Magnoliaceae), the flowers are radially symmetric with separate parts, some of which (stamens and carpels) are very numerous and spirally arranged. This floral morphology, resembling leaves on a branch, are indicative of an ancestral, little-modified, condition.