The life histories of raspberries and blackberries (with blackberry as an example). So-called “brambles,” i.e., blackberries, raspberries and dewberries, are members of the genus Rubus, a bewildering multi-species array of shrubs (sometimes vine-like sub-shrubs) in the rose family that produce aggregates of drupelets. An aggregate fruit is a tight cluster of small fruits that disperse as a unit, all of which are derived from the same single flower–one that had a compound pistil (also termed an “apocarpous gynoecium”).

Below, see on the left a cross-section through a portion of a blackberry flower showing the many carpels, each of which will develop into a drupelet, one of the little globe-shaped potions of a mature blackberry. On the right are a few mature blackberries, which are thus aggregate fruits.

Blackberries versus raspberries. A slight difference in the way that the aggregate fruit separates from the parent plant distinguishes blackberries from raspberries. With blackberries the central portion of the base of the flower–the receptacle–comes along with the fruits, persisting as a little almost woody stuffing on the middle, whereas in  raspberries the receptacle stays on the fruiting plant so the fruits are neat hollow thimble-like affairs. Below, see a portion of a fruiting blackberry stem b before (left) and after (right) one was picked; notice that the receptacle is missing after the blackberry was removed.

A blackberry, when removed, includes the receptacle.

A raspberry, when removed, leaves the receptacle behind. 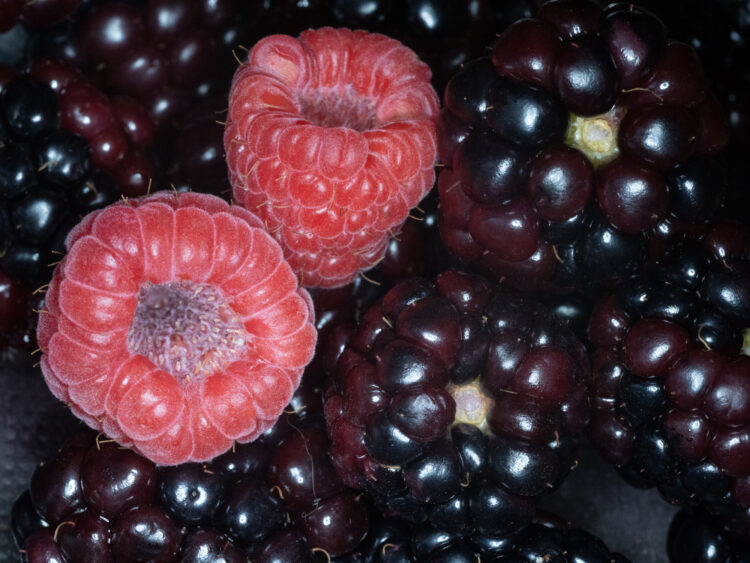 A grocery store botany lesson on Rubus.
The fruits are aggregates of miniature drupes.
Raspberries separate completely from the base of the flower (the receptacle) so they are hollow and thimble-like,
while blackberries include the receptacle, looking “stuffed.”

The genus consists of perennial plants that have biennial (living for 2 years) stems called “canes.” During the first year a cane  produces leaves only, and is called a “primocane.” In year two those same stems, now called “floricanes”  produce flowers and fruit, and die afterward. Below, see the two types of canes of a blackberry. 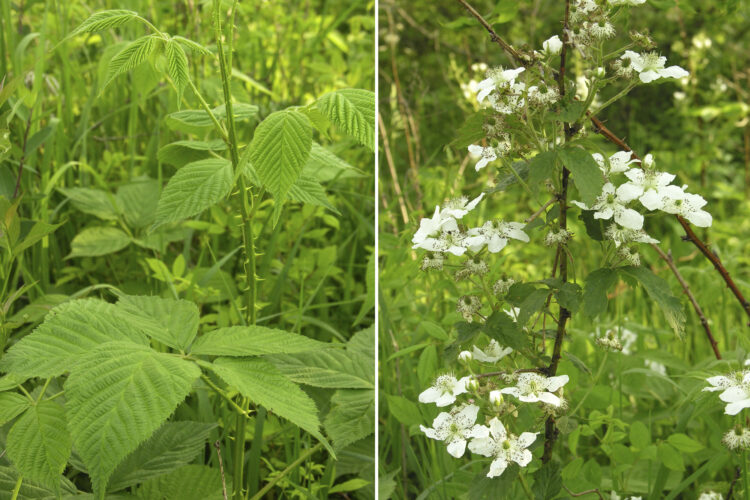 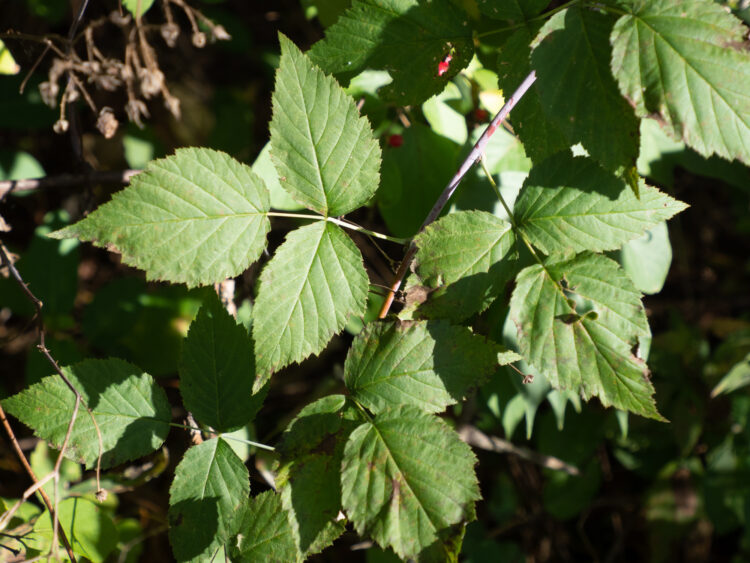 They are whitened beneath. 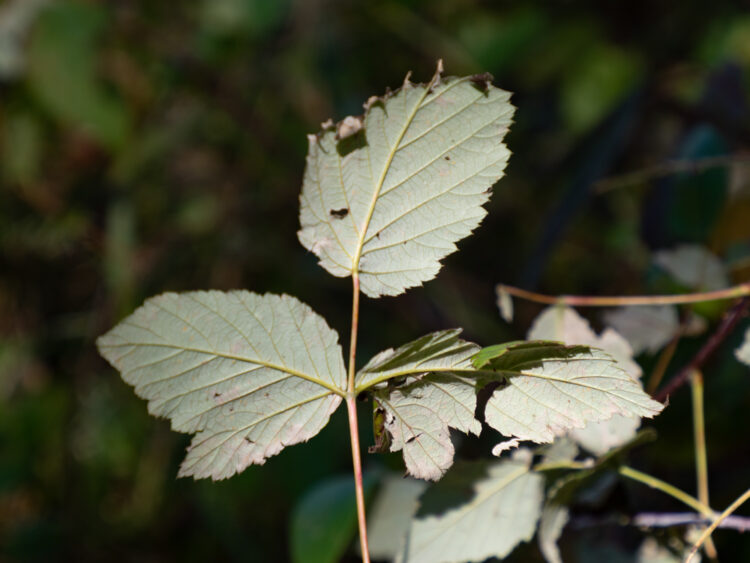 Black raspberry leaves are whitened beneath.

The stems are long and arching, sometimes rooting at the tips, with a glaucous (having a powdery bloom that can be rubbed off) surface. 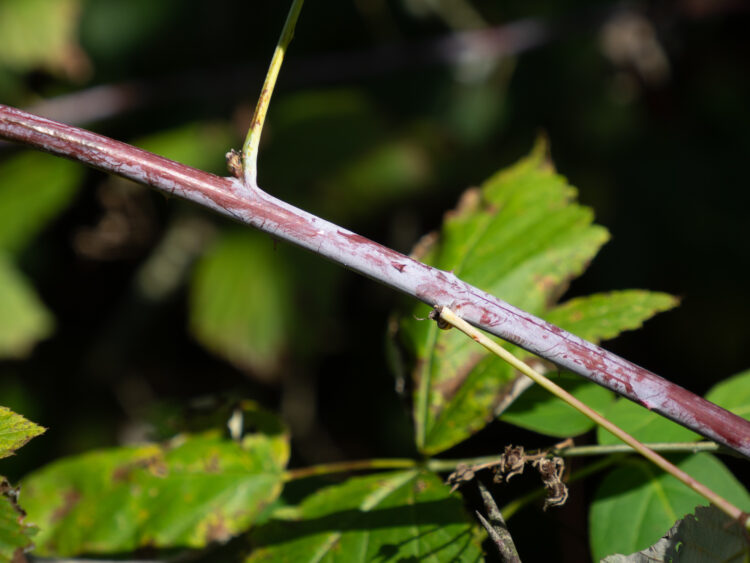 In late fall the floricanes are just withered remnants, having shed their fruit months earlier. 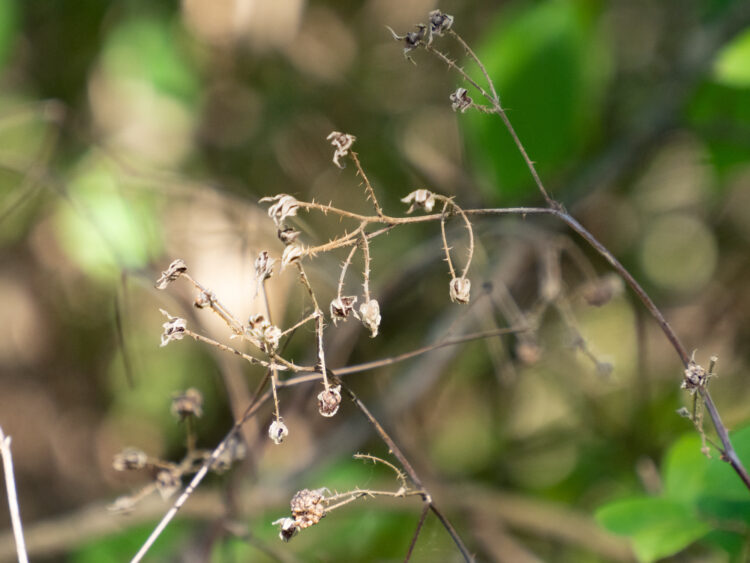 Where to find black raspberry. E. Lucy Braun, in The Woody Plants of Ohio (1961, 1989; The Ohio State University Press) tell us that that Rubus occidentalis is “A common species ranging almost throughout the Deciduous Forest, with closely related species southward into the Tropics. Generally in mesic situations in open woods of slopes and ravine flats. Widely cultivated. Recognized by its glaucous, strongly arching stems rooting at the nodes, and ternate or quintate (digitate) leaves whitened beneath. 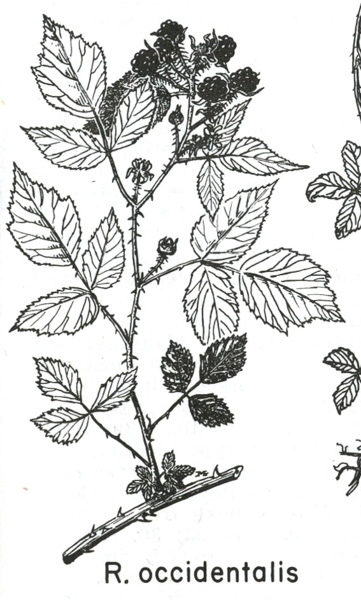 Can you describe the plant and stem longevity, and the names and composition of the two types of “canes” that occur on  raspberries and blackberries?

Yes…there are primocanes and floricanes, as described on the 4th paragraph above (where it says “The genus consists of…”). Please refer to that passage for details required in my answer.