How to recognize eastern cottonwood. The specific epithet “deltoides” is apt. It means “triangular,” and the alternately arranged and coarsely toothed leaves are indeed so shaped. 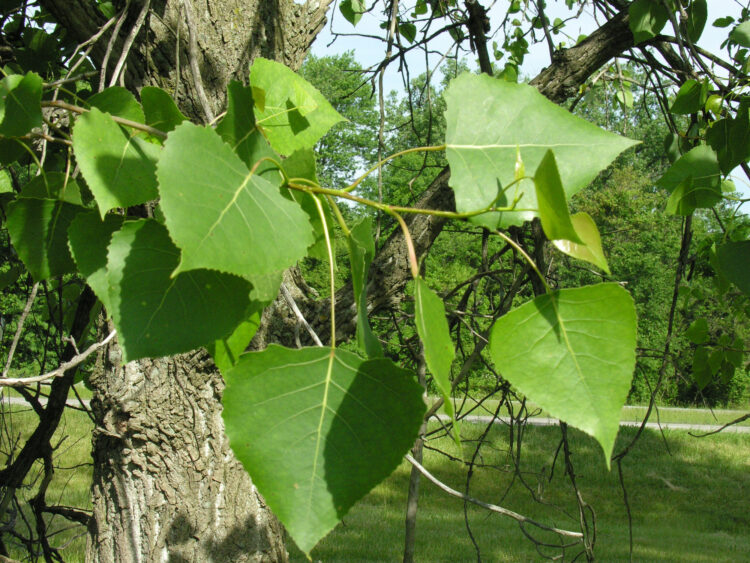 A fun little quirk is that the leafstalks are flattened and, as a result, they shake and quiver in the slightest breeze. 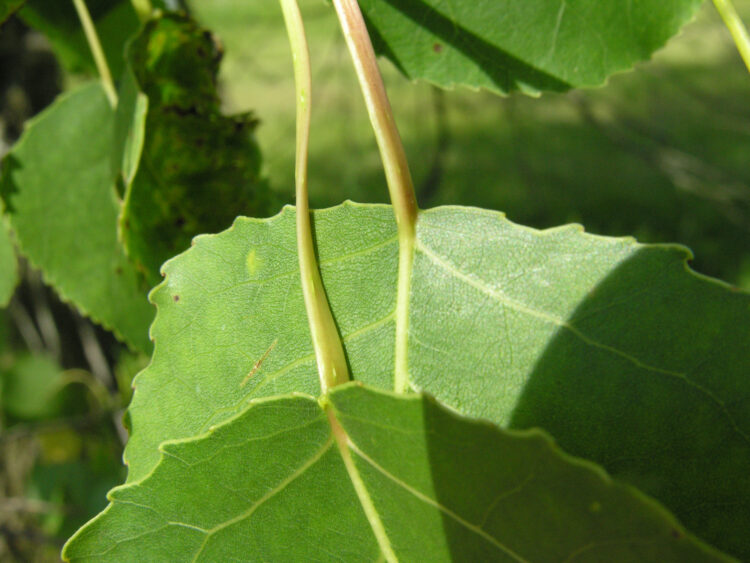 Flowers and fruits. As members of the willow family (Salicaceae), cottonwoods are dioecious, having separate male and female individual plants. They are wind-pollinated. Below, see a male eastern cottonwood in flower. (The flowers appear before the leaves.) 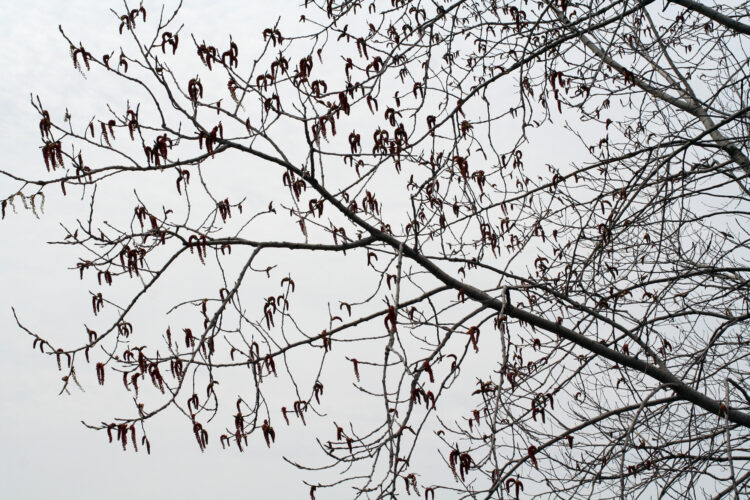 In a somewhat unusual twist, not only are the male flowers borne in catkins, but the females too. 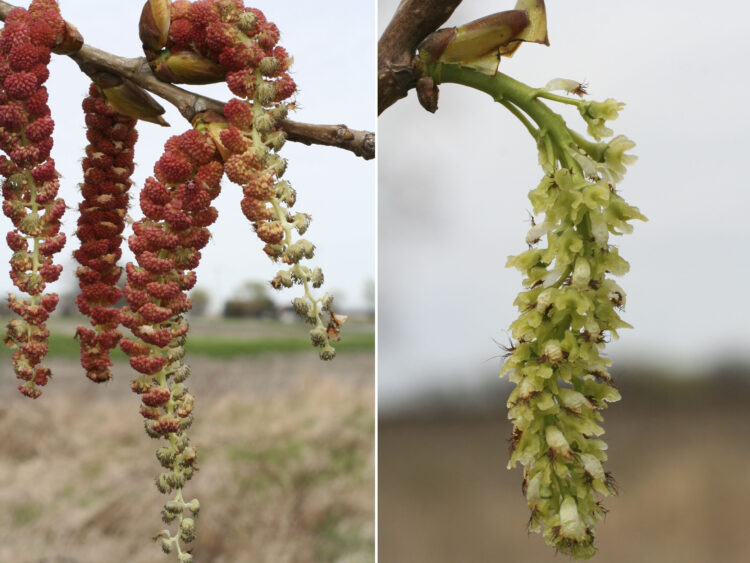 The fruits are small capsules that are very numerous, setting forth vast quantities of cottony seeds. 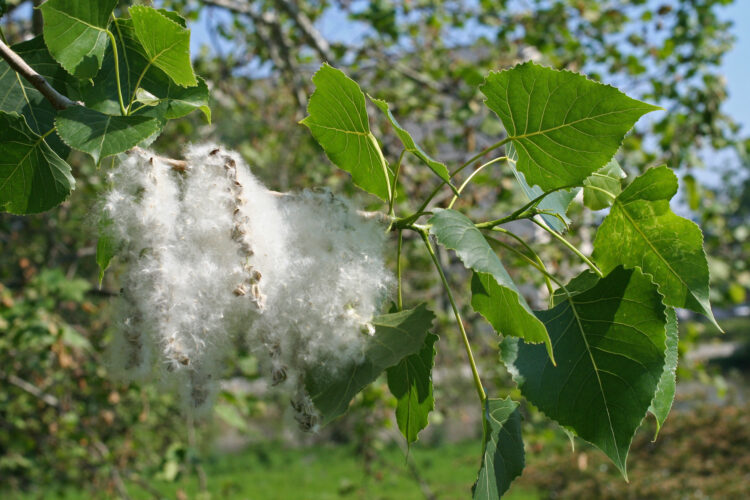 Snow in June? The cotton-a-pallooza can be quite extravagant in areas where the trees are abundant such as along the Lake Erie shore. 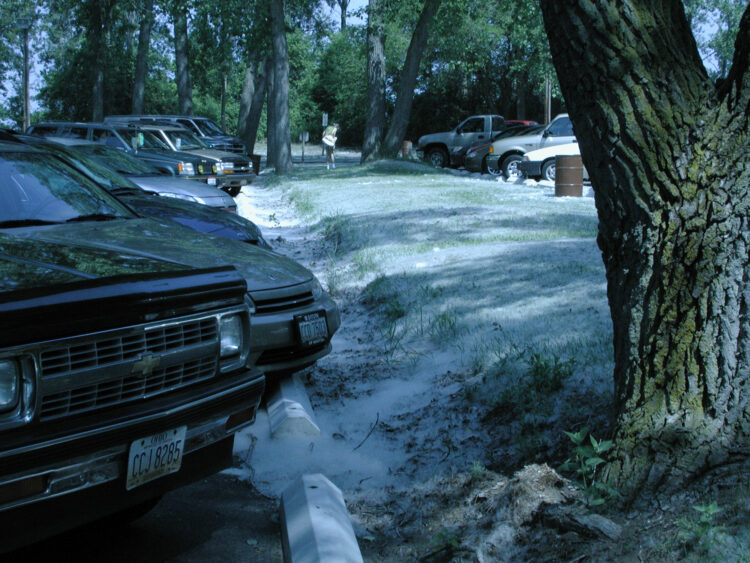 In the winter. Populus twig have a true terminal bud, about 4 times as long as wide, that is quite resinous. The leaf scars are triangular, with 3 bundle scars, and the lowermost bud scale sits directly above the leaf scar. 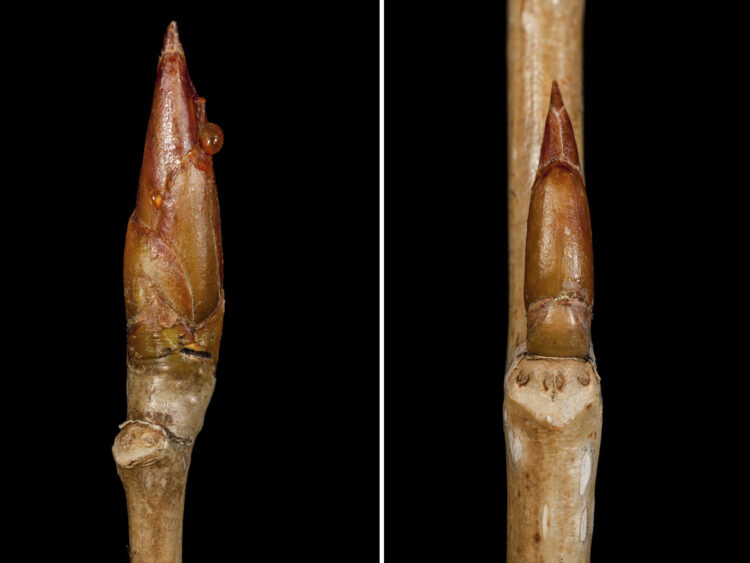 Where to find eastern cottonwood. E. Lucy Braun, in The Woody Plants of Ohio (1961, 1989; The Ohio State University Press) tells us that this species is “A common and widespread tree, ranging over the eastern half of the United States, except in the higher mountains. A large tree of floodplains and bottomlands; can endure long periods of partial submergence, hence is frequent on the alluvial bottoms of large streams subject to overflow. Fruiting catkins 15-20 cm. long, from very large outwardly curving buds, the 3-4 valved capsules opening in May, releasing the seeds, each furnished with a tuft of long cottony hairs; seeds retain their viability but a short time, germinate readily on mud left by receding flood-water, on moist depressions between dunes, etc. Generally distributed in Ohio in suitable habitats.” 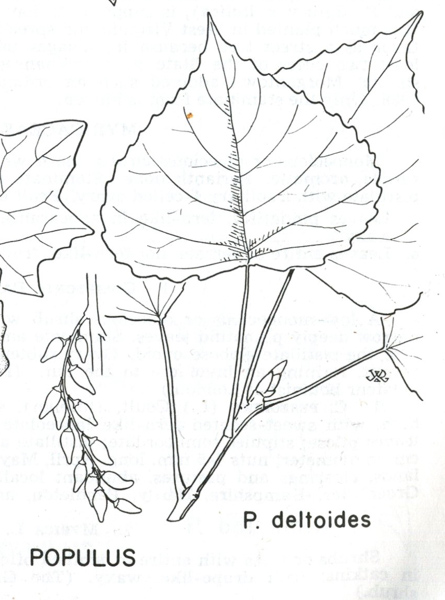 In addition to cottonwoods, what other plants are in the genus Populus? What else is in its taxonomic family?

Along with cottonwoods, poplars and aspens comprise the genus Populus; willows are in the same family (different genus though).