How to recognize pawpaw. Look for somewhat flattened sprays of foliage, with leaves that are large–consistently more than 6 inches long –and toothless, shaped distinctly lance-obovately, i.e., linearly egg-shaped, but (signified by the “ob”), meaning with the wider portion of the leaf nearest the tip, not the base. Pawpaw spreads clonally, so it is common to see a great many small sprouts about knee height on the forest floor. 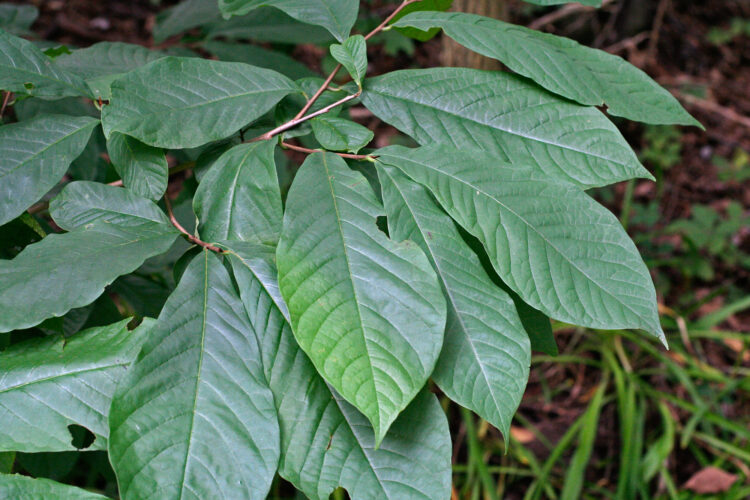 Flowers and fruits. Pawpaw flowers emerge from the previous year’s branches in early to mid-May, when the leaves are just beginning to emerge. 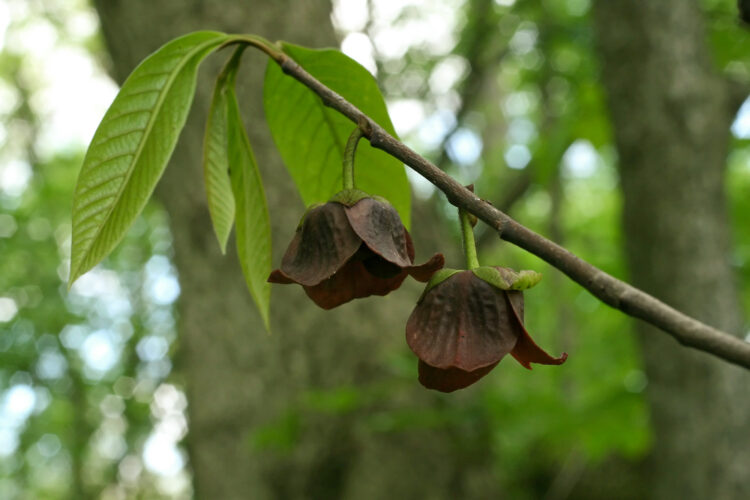 The flowers are large, dark purple, hanging bell-like from the branches. They have a fetid (skunky) aroma. There are 3 sepals that fall early, and 6 petals, of which only the outer 3 are prominent. The stamens are numerous (the globe-shaped mass in the image below, and there are 3-15 pistils. The flowers are protogynous, i.e., having the female organs mature prior to the male ones. The principal pollinators are carrion-seeking beetles and flies. The plants are self-incompatible, requiring pollination by genetically distinct individuals for fruits to develop. 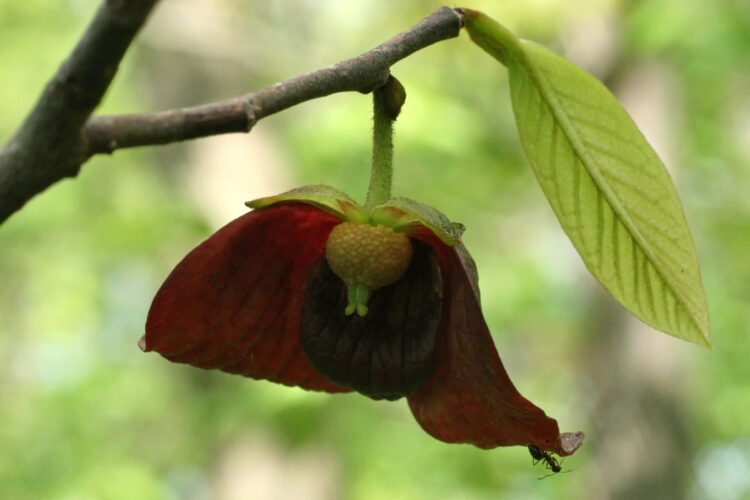 Pawpaw flowers are perfect (bisexual), with numerous stamens that mature after the 3-15 pistils.
May 17, 2008 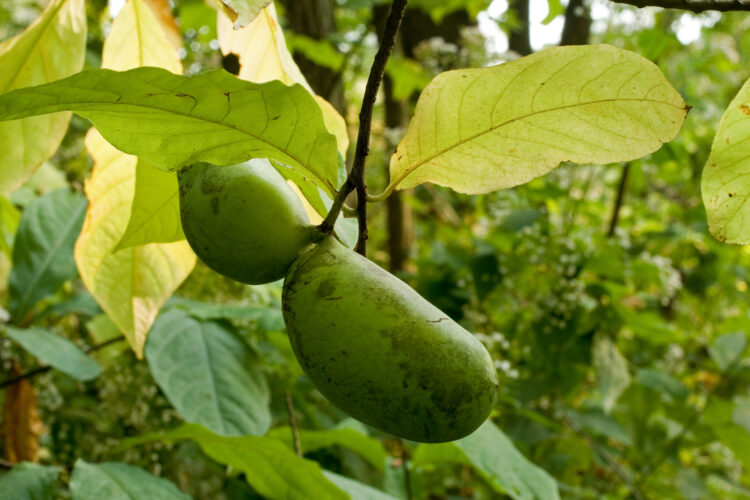 In the winter. Pawpaw twigs have alternately arranged naked (non-scaly) buds. The leaf buds are long and narrow; the flower buds are globose. 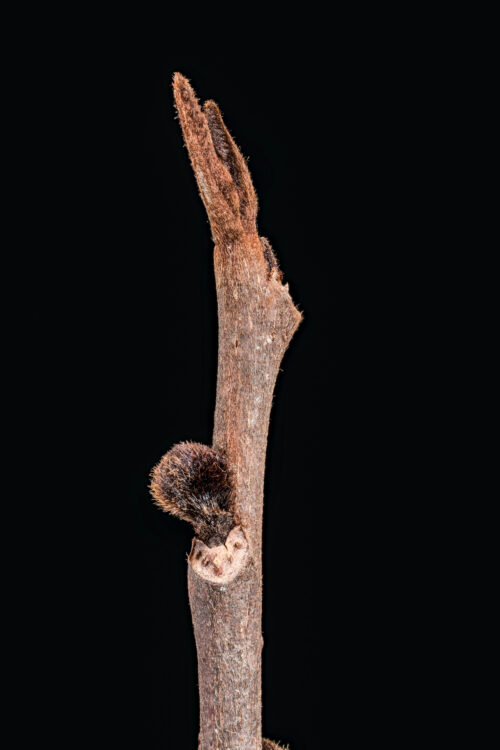 Where to find pawpaw. E. Lucy Braun, in The Woody Plants of Ohio (1961, 1989; The Ohio State University Press) tells us that pawpaw is “In mesic woods of ravine slopes and sometimes in cleared areas, especially pastures (the ill-scented, when bruised, foliage is not palatable to cattle) throughout Ohio, but local northward.

Oh, also in the grocery store. Not as a produce item you can buy (although sometimes maybe that too), but tattooed on the arm of a fellow shopper who didn’t mind me snapping a photo! 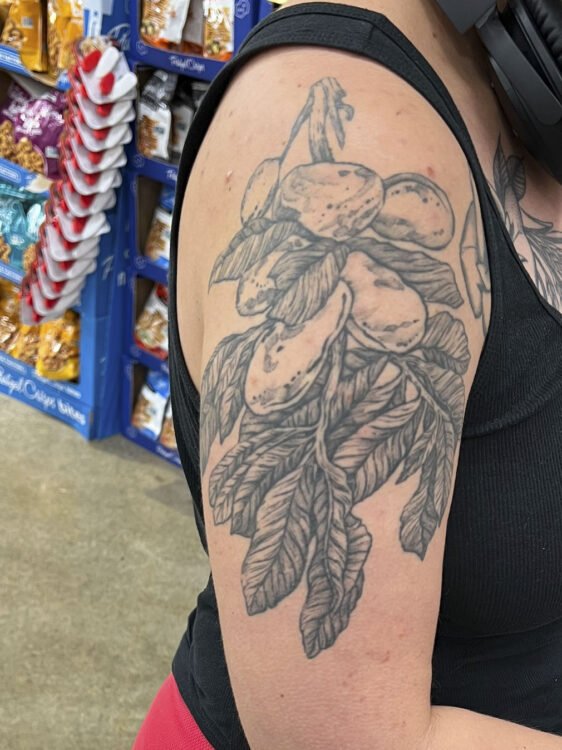 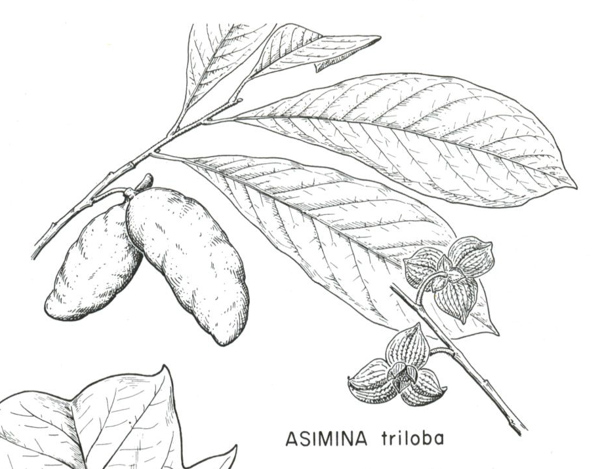 What are three noteworthy aspects of pawpaw with respect to animal ecology?

(1) Pawpaw is unpalatable to grazing animals, hence it is abundant in forests that are heavily impacted by deer.  (2) The rank-smelling flowers are pollinated by carrion-seeking flies and beetles. (3) Mature fruits can be hard to find because they are eaten by opossums, squirrels, and racoons.