How to recognize a grape.  Grapes are woody vines with simple, serrate leaves. The stems attach to trees with branched string-like tendrils that emerge opposite many of the leaves. Leaf outline varies among species and sometimes within species in the degree of lobing, varying from unlobed to being lobed almost halfway to the midvein. The fruits are dark purple-black berries, produced abundantly in branched clusters.

Five Vitis species occur in Ohio, of which two are especially common and abundant and so are considered here. These are frost grape (Vitis vulpina) and riverbank grape (Vitis riparia), which can be told apart from our three less common grapes by having green and essentially hairless leaf undersurfaces (the other grapes are whitened and/or very hairy beneath). 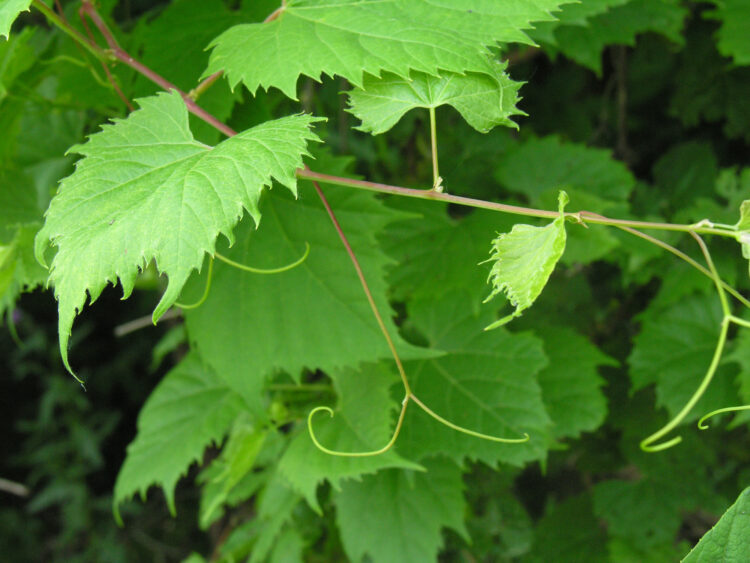 The vines can be very large, sometimes even causing damage to the trees they are growing on. 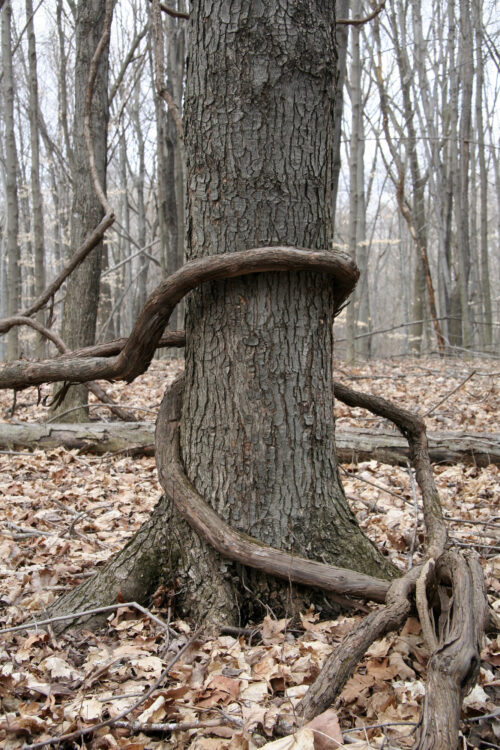 Grape flowers are small and functionally unisexual. The petals fall early. Most of the flowers in the photo below are staminate (male). 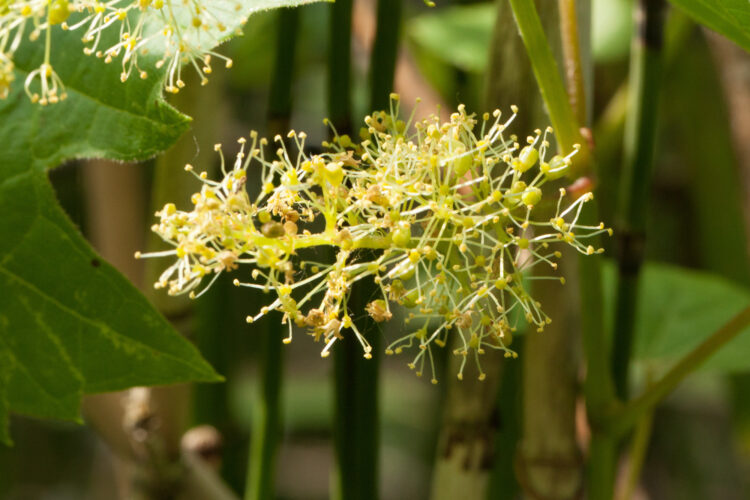 Traits of the two look-alike species are summarized in the table below.

The two most common and most similar grapes in Ohio.
Note the depictions of the pith-diaphragms (thicker in V. vulpina).

A similar depiction appears in Cooperrider (1994) “The Dicotyledoneae of Ohio PART 2, LINACEAE THROUGH CAMPANULACEAE” published by the Ohio State University Press. 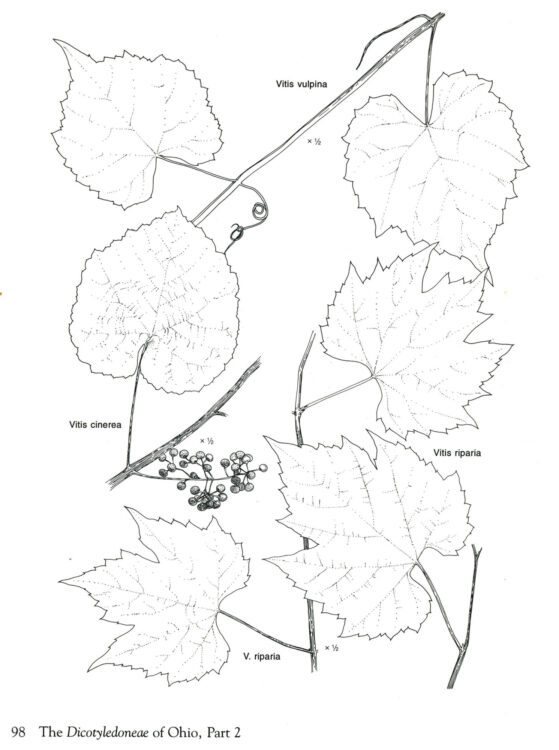 They are also represented in Flora of West Virginia, by P.D. Strausbaugh and Earl L. Core. 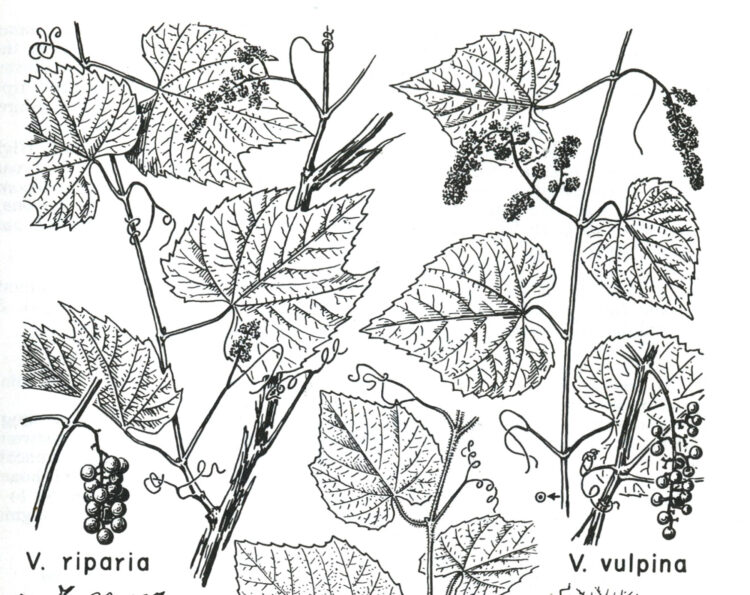 Grapes in Flora of West Virginia.

Judging by the unlobed leaves and non-glaucous (lacking a powdery bloom) fruits, the grape shown below in appears to be frost grape, Vitis vulpina. 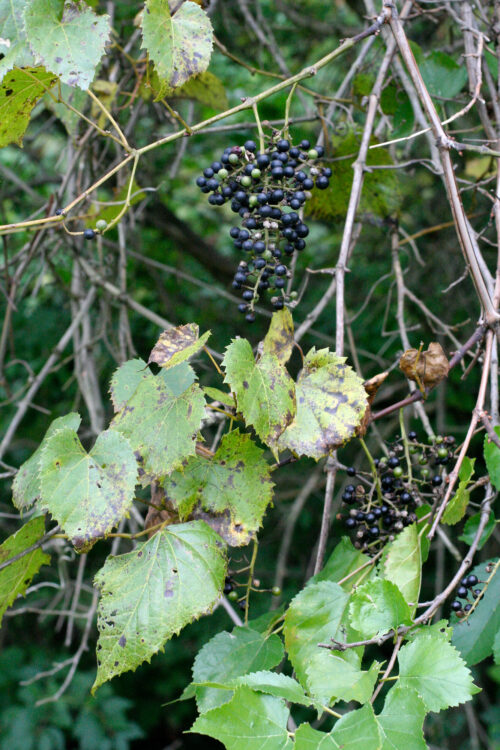 I’m happy calling this one riverbank grape, Vitis riparia, because it the leaves are lobed, with the lobes angled toward the leaf apex. 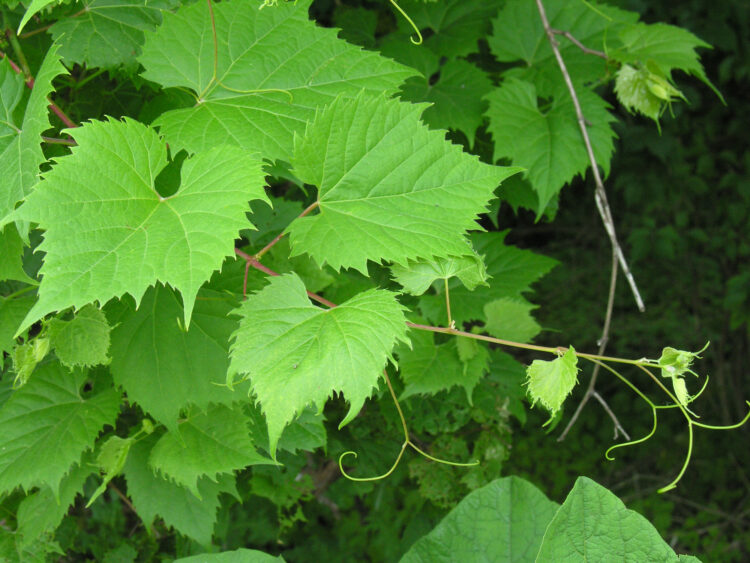 Where to find frost grape. E. Lucy Braun, in The Woody Plants of Ohio (1961, 1989; The Ohio State University Press) tell us that that this is “A common and widespread species, high-climbing, forming dense canopies over the crowns of small trees;  trunks sometimes 50-60 cm. in diameter. Usually distinguished by the coarsely toothed unlobed or obscurely lobed leaves, green and glabrous beneath except for tufts of hairs in the vein-axils, margin not ciliolate, and black fruit without bloom. Almost throughout the deciduous forest, except the northern part.

Where to find riverbank grape. Vigorous high-climbing vine, similar in habit ti V. vulpina; somewhat more northern in range than the frost grape, and more frequent than that species in northern Ohio. Lobes of leaves usually prolonged and acuminate, margin ciliolate, basal sinus wide, nodal diaphragm wider than thatg of other species, and black fruit heavily glaucous. Both scientific and common names suggest the usual habitat of this species.

Can you explain what “sp.” and “spp.” mean after a genus name?

Employed when you want to refer to species without saying what species you mean (either because you don’t know or it isn’t pertinent) these are abbreviations for “species” either in a singular sense as “sp.” referring to one unnamed species, or in a plural sense “spp.” referring to more than one unnamed species. Because they are not Latin words, they are not italicized in the way the genus and specific epithet are.

For example, if you see an oak but don’t know or care what oak it is you could write Quercus sp. in your field notebook. Conversely, if you are describing the vegetation in an diverse oak-hickory forest, you might say “The overstory consists of Quercus spp. and Carya spp., along with a few large specimens of Fagus grandifolia.”