This web site features the trees, shrubs and woody vines that are the subject of Ohio State University’s ENR 3321, Biology and Identification of Woody Plants. When completed, it will consist  of individual pages that describe each of the 60+ species covered in the course, and virtual field trips to the 5 study sites.

The principal characteristics used to distinguish trees are features of their leaves. Who knew? First and foremost, we have LEAF ARRANGEMENT, which tells us how many leaves are attached at each NODE (i.e., the point along the stem where leaves are attached).

Another leafy distinction has to do with whether or not the leaf consists of a single unbroken blade, or if instead it’s fully and completely divided into separate leaflets. The set of traits is called LEAF COMPLEXITY, and comes in two general types: undivided leaves are termed “simple,” and the divided ones, “compound.” Compound leaves can either be pinnate (leaflets arranged along the leafstalk), palmate (all attached at the same point), trifoliolate (like poison ivy) or twice compound (leaflets themselves divided into sub-leaflets). 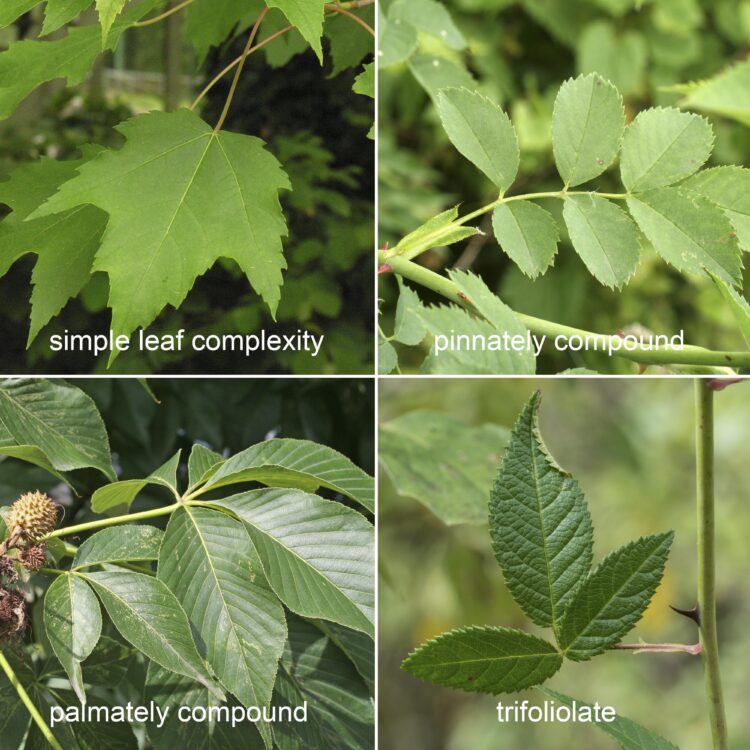 A third category of distinctions deals with the leaf margins. 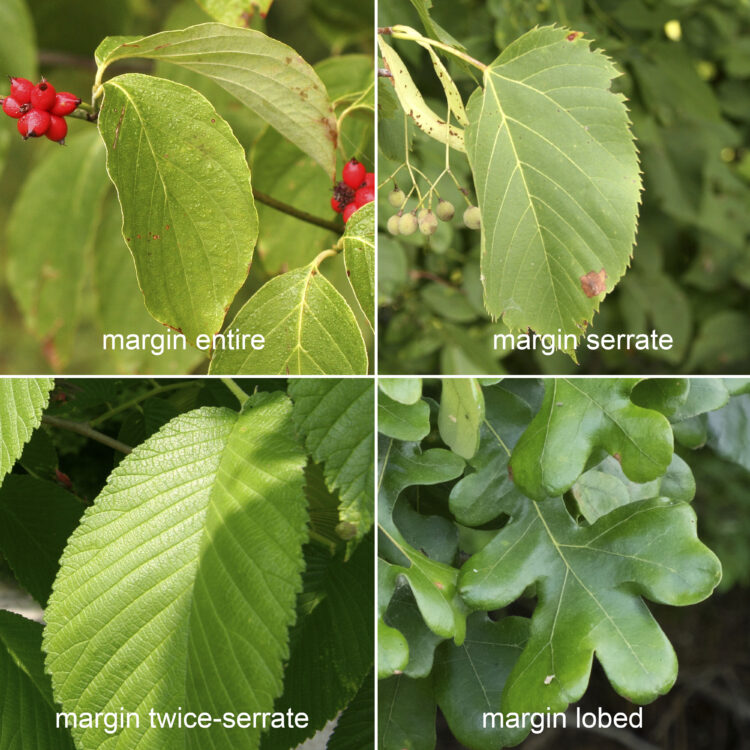 Buds are embryonic branches or flowers in a dormant state ready to resume growth when it gets warm again. The buds of most species are protected by tough bud scales. Bud scales can either be arranged in pairs facing each other edgewise (valvate bud scales) or overlapping like shingles (imbricate scales). A few species have naked buds that lack scales and are protected instead by a pair of miniature leaves. 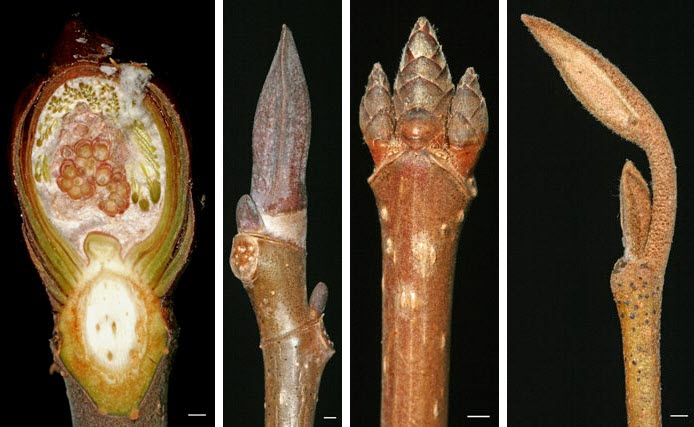 During the growing season lateral buds develop just above the point where the leaf rises off the stem. At the apex of a twig there may be a terminal bud that is larger than the laterals and points strictly forward. Some twigs lack a terminal bud, having instead a false terminal bud at the end of the twig which is actually the last-formed lateral bud. Alongside a false terminal bud look for the tip scar — a remant of the sloughed-off portion of the branch tip that formerly extended past the bud. Oaks are noted for their clustered end buds that are actually lateral buds with very short internodes crowded towards the end of the twig. 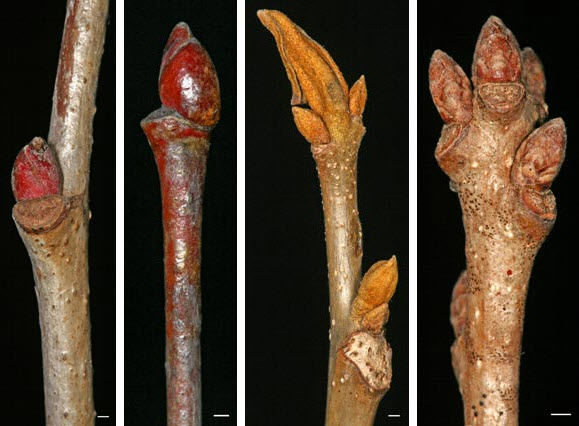 The point along a branch where a leaf is attached is called a node. “Phylotaxy” is a descriptive scheme that describes the precise manner in which leaves are arranged on a branch. The simplest set of phylotaxy descriptors calls attention to the number of leaves (and accordingly the axillary buds) per node.There are three types of leaf (bud) arrangement, of which the most common is alternate, i.e., one leaf (bud) per node. Less frequent but by no means rare are species having two opposite leaves (buds) per node. A very few plants have whorled leaves (buds), with three or more at each node. Sub-opposite buds are morphologically alternate, but they are have such a small length of twig (internode) between them that they practically appear opposite. 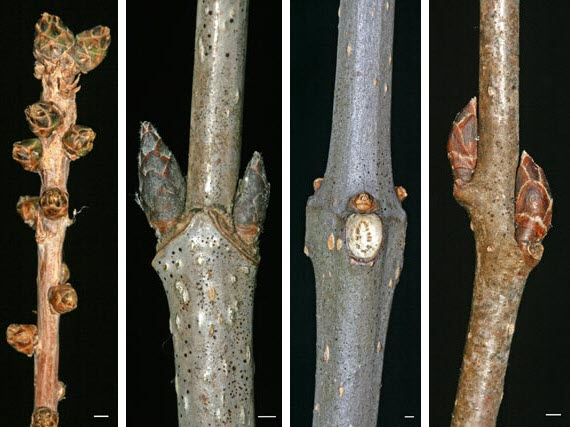 When a leaf falls from a branch at the end of the growing season, a rough patch reamins under its base, the leaf scar, within which there are one or more bundle scars –remnants of the “plumbing” (vascular system) connection that extended between the veins of the leaf and the branch. Leaf scars come in many distinctive shapes and sizes, and the number and distribution of bundle scars is distinctive, too. A useful feature to determine the age of a twig (or how much growth occurred in one season) is an array of several narrow, crowded, bud scale scars left where the scales fell from a true terminal bud at the initiation of the growing season. When fruits fall off a tree, sometimes they leave a fruit scar. 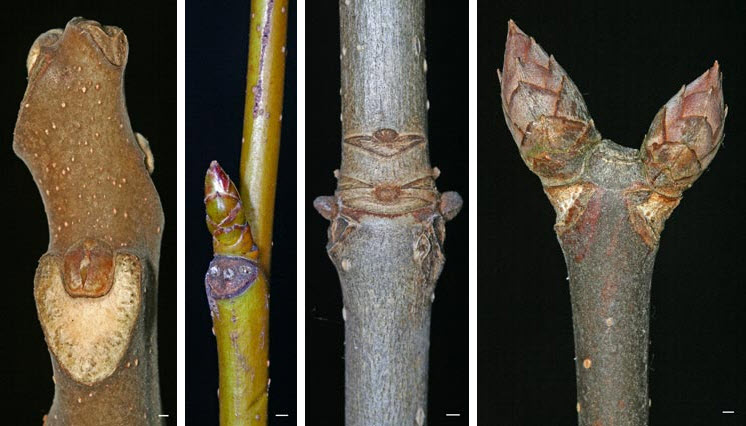 Some leaves have stipules: little leaf-like apendages at base of the leafstalk, where it joins the stem. Because they’re attached to the twig, stipules, when they are shed, may leave a stipule scar. In a few species the stipule scars are very prominent, wrapping entirely around the stem. (Other plants have shorter stipule scars, occurring as short lines extensing down from the corners of the leaf scar.) 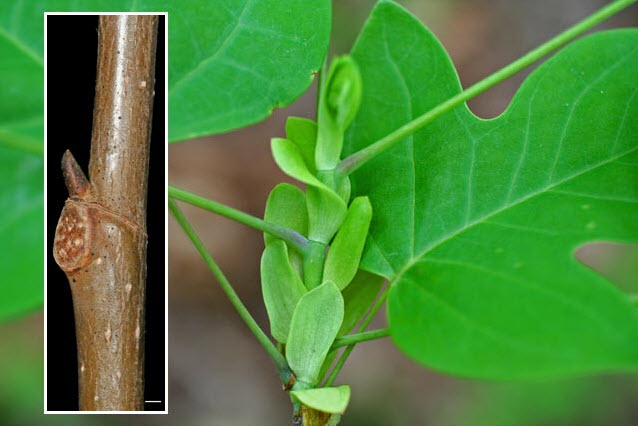 Although they both hurt when you grab them (or if you are a deer, when you try to eat twigs that have them) there are slight anatomical differences between the various types of plant armature. Spines are modified leaves or stipules and as such are generally thinner and shorter than thorns, which are modified branches. Prickles are slender outgrowths of the epidermis. 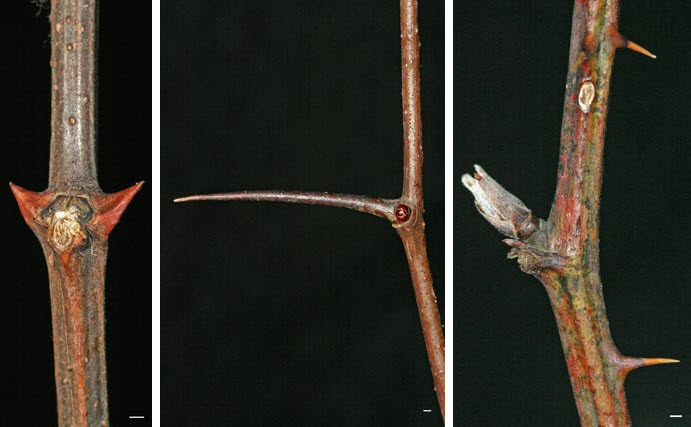 …and other surface features

Plant surfaces usually lack hairs (i.e., are glabrous), so when we see ones that are pubescent (hairy), they stand out. Similarly, twigs may be smooth or have wing-like ridges, depending upon the species. The surface of the twig is often a good feature to distinguish otherwise similar species within a genus. 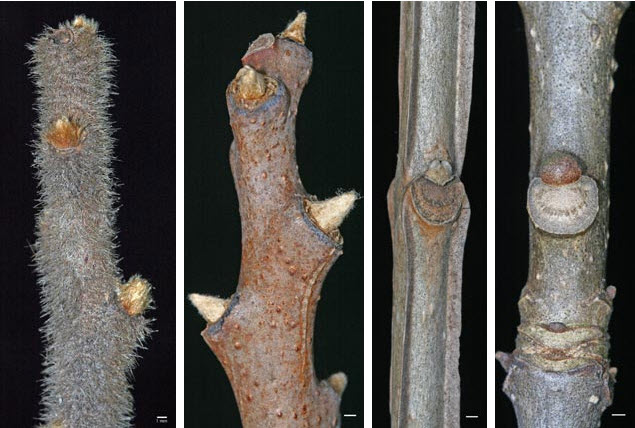 The central cylinder of a twig –the pith — is composed of non-woody tissue having a markedly different texture than the surrounding remainder of the twig. Viewed in a longitudinal section made with a razor blade or sharp knife, there are several potentially distinctive aspects of pith. Most species have pith that is fairly unremarkable: smooth without any interuptions, called continuous homogenous pith. More interesting pith has cross walls (partitions). If these partitions occur additional to continuous material in the center of the twig the pith is said to be diaphragmed, whereas if the partitions occur in an otherwise hollow space the pith is chambered. A few species lack pith altogether. 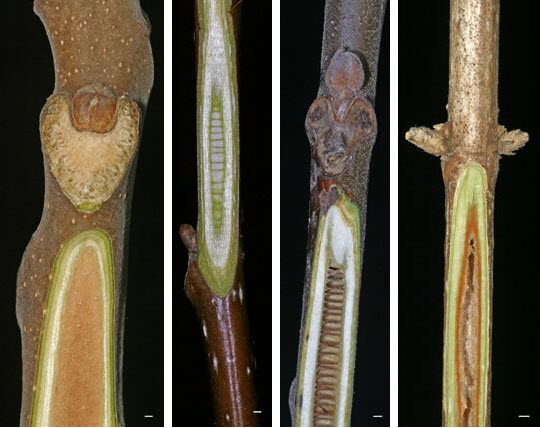